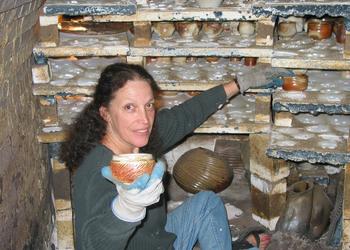 Gale Lurie has been a potter all of her adult life, though for over 26 years, teaching required that she spend nine months of the year molding small children rather than clay.

In 1993-94, she took a sabbatical to work as a special student in the Ceramics Department of the University of Washington with Patti Warashina, Akio Takamori and Jamie Walker.  This convinced her that she wanted to pursue pottery as her life work, and she took early retirement as soon as she was eligible, to follow this dream.  She then was a resident potter at Pottery Northwest in Seattle for five years before working exclusively in her home studio.

Still enjoying working with children, Gale taught ceramics classes at the Northwest School in their summer program for eight years, and has served as an artist-in-residence at a number of schools.  She worked as a consultant/mentor at John Stanford Elementary School in Seattle for six years, creating their clay curriculum each year and training the teachers and parents in pottery techniques, glazing and kiln firing.

She created and worked at “Claystation” for the Seattle International Children’s Festival, which captivated a couple of thousand children (of all ages) each year.

She participates in many group shows and has held an annual studio sale for the last thirty+ years. Her studio was on the North East Art Tour (NEAT) in Seattle for five years until she moved to Vashon Island in 2015.  Now she's on the Vashon Island Art Studio Tour every June and December.  She has been an invited artist in the Master's in Miniature Show at the Vashon Center for the Arts the last two years.  Her work is also available at several galleries in the Northwest.

Gale has long been active in the clay community and is past president and vice president of the Washington Clay Arts Association (formerly Washington Potters Association).  She has also been a member of the Northwest Designer Craftsmen for several years and is the co-chairman of their exhibition committee, as well as a participant in many of their shows.

In 2005, she envisioned, founded and had a booth at the Wedgwood Arts Festival in her old neighborhood, which has grown to be a fun and popular community activity.

Gale continues to create forms that are beautiful, useful and affordable.  She loves to hear how her works have been used and treasured over the years. Her style is very eclectic and she loves to try new techniques, glazes and firings.  All of her creations are truly one of a kind.